Wellbeing and health are very much influenced by lifestyle and in particular by the diet. A correct diet can greatly increase the likelihood of preventing disabling and deadly degenerative (or "chronic") diseases, now widely spread in Western countries, almost like a modern epidemic. Furthermore, some of these diseases can also be treated with a healthy diet of 100% plant-based foods, "as gathered" and of low fat content. 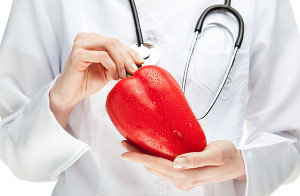 Since World War II, Italian dietary habits have changed greatly: from the traditional Mediterranean diet, mainly plant-based, with a very low consumption of animal foods, they passed to a "Western diet", based largely on animal foods (meat, fish, dairy products, eggs), with a low consumption of plant foods and those few, mostly processed, not "as gathered".

According to the Academy of Nutrition and Dietetics, high intakes of vegetables, fruits, whole grains, legumes, nuts, seeds, and soy products, all high-fiber and phytochemical-rich foods, are the components of a vegetarian diet that contribute to the reduction of chronic diseases. Vegetarian diets are also associated with a lower risk of heart disease, hypertension, type 2 diabetes, obesity and some cancers; low-fat vegetarian diets, combined with other healthy lifestyle factors, have proven to be effective in the treatment of these diseases.

In addition to diet, bad habits to correct for a good prevention are a sedentary lifestyle and substance abuse, i.e., smoking, alcohol, coffee.

Arteriosclerosis (or atherosclerosis) has become the leading cause of death in Western countries. Cardiovascular disease is responsible for about half of all deaths in Europe.

It affects the arteries, on which atherosclerotic plaqueis formed, which is a deposition of cholesterol that slowly increases in size, finally causing the obstruction of the artery. However, far more dangerous is the rupture of a plaque, even a small one, because this creates a thrombus, which causes the sudden obstruction of the artery, blocking the flow of arterial blood and all the vital processes in the area dependent on the arterial flow.

So, atherosclerosis is asymptomatic, until such an event happens, causing heart attack or stroke; but it's a process that continues for decades and has its beginning in childhood.

The main risk factor is the level of "bad cholesterol" (non-HDL, that is, LDL + VLDL) and of triglycerides in the blood . But smoking, diabetes, sedentary lifestyle, high blood pressure, lack of dietary fiber and excess dietary animal fat are also important risk factors for this disease.

Precisely for this reason, arteriosclerosis is significantly affected by the diet, which can speed it up, but the other way round is also true: with a proper diet is is possible to stop and even cause the regression of the atherosclerotic plaque. When blood cholesterol levels drop below 150-160 mg/dl, the fats deposited in the artery wall are reabsorbed, the plaque is reduced and the risk of plaque rupture is reduced.

High blood pressure is that condition in which the maximum pressure (or systolic) exceeds 140 mmHg and the minimum (or diastolic) exceeds 90 mmHg; it is a widespread disease in Italy, affecting one adult in 3.

It is a chronic disease that damages arteries but that begins asymptomatically (at most: headaches, nasal bleeding or dizziness) until an acute event, such as heart attack or stroke, occurs. Over time, it can also lead to heart failure , that is, the inability of the heart to efficiently pump blood to the various organs and systems. Hypertension, as with diabetes, also damages the small blood vessels of the kidneys and the eyes, causing kidney failure and vision impairment.

In this case as well, the risk factors are associated with the diet: overweight-obesity, high salt intake, excess fat and the lack of fiber in the diet. Arteriosclerosis and hypertension also negatively affect each other in a vicious circle.

The diet is also able to reverse high blood pressure without medication. The plant-based diet is able to keep blood pressure values within normal limits and, in hypertensive patients, to lower them to normal values; This effect, independent of low salt content, seems attributable to high potassium content of the diet, and its effects on reducing body weight and blood viscosity.

Non-vegetarians have a prevalence of hypertension 2-2 .5 times higher when compared to vegetarians, and from studies it seems to be a combination of some variables that are typical of a vegetable-rich, meat-free diet that beneficially influences blood pressure values.

More than a billion people in the world has problems associated with excess weight. Overweight people have an increased risk of other chronic diseases, such as cardiovascular diseases, cancer, diabetes, hypertension and diseases of musculoskeletal “overload”.

Obesity was defined by the Italian Ministry of Health as "the second leading cause of preventable death after smoking" ( Ministry of Health, 2003, National Health Program, 2003-2006). The population would be instructed on how to satiate themselves without the intake of more calories than necessary, something that can be easily done by choosing natural plant foods (that have a low-calorie density) and drastically limiting, or better yet excluding, animal foods from the diet.

In scientific studies on large groups of people, increasing the frequency of meat consumption is reported to be directly correlated with an increase in body mass index (BMI), and on average vegetarians have lower BMI results and lower obesity rates than non-vegetarians; vegans have the lowest BMI of all dietary groups.

Insulin is a hormone involved in cell growth, and can, for example, promote the appearance of tumors and may increase the risk of atherosclerotic plaque formation. In fact, diabetes is a major risk factor for atherosclerosis, and is also responsible for peripheral nerve damage (diabetic neuropathy). The main risk factor of diabetes type 2 is overweight-obesity and the consumption of animal foods, and sweet and refined foods that are poor in fiber, high in fat and have a high glycemic index.

Scientific studies show that the risk of developing diabetes is significantly reduced in the vegetarians, especially if vegans, and that a low-fat vegan diet can improve metabolic control of diabetes more than the diet recommended by the American Diabetes Association (the best diet for comparison!), the American society for the study, prevention and treatment of diabetes.

A varied diet based prevalently or, better yet, exclusively on plant foods, associated with special attention to the sedentary lifestyle, are the two most important therapeutic means that must be embraced for the prevention and treatment of this serious disease.

Cancer accounts for about 30% of deaths in Italy. On average, one third of all cancers are caused by diet, although for the more frequent cancers, such as prostate and colon, 75% can be caused by diet.

International guidelines for cancer prevention emphasize the importance of consuming copious amounts of unprocessed plant foods. The protective effect of plant foods seems tied to a plentiful and varied consumption of all plant groups, consumed as natural as possible, i.e., not deprived of their content of protective substances, and consumed cooked and raw, because some protective substances are inactivated by cooking, while others are activated by cooking itself.

Osteoporosis is a disease that damages the bone, making it extremely vulnerable to even minimal trauma, which can easily cause vertebral, femoral neck and wrist fractures. Every year millions of people have fractures and, among those reporting a proximal femoral fracture, permanent disability and death rates are high. Beside low dietary intakes of calcium and protein, other causes of osteoporosis are the excessive consumption of substances that, together with a sedentary lifestyle and smoking, steal calcium from bone, e.g., sodium, caffeine and alcohol.

In fact, it has not yet been clarified whether and to what extent bone health is affected by intakes of calcium. Furthermore, according to studies of the Harvard School of Public Health, the scientific evidence does not support the role of high consumption of dairy products in the prevention of osteoporosis.

The plant kingdom is able to provide adequate amounts of easily assimilated calcium (see the section dedicated to calcium) and more than adequate amounts of protein. There are also additional benefits to acquiring calcium from plants: plant foods rich in calcium are also rich in vitamin K, phytoestrogens and potassium, all compounds that positively affect bone health.