Milk is far from being an important food for human consumption, as many have been led to believe: it is not only not helpful, but it turns out to be harmful like any other animal product, a risk factor for the chronic diseases described in Preventing diseases. In addition, its consumption is something totally unnatural: milk is made for infants, not for adults or for children already weaned, and even for infants only human milk is adequate, not that of other species. 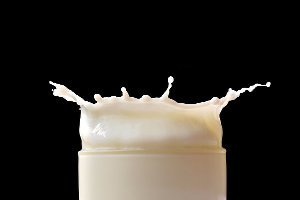 It is no coincidence that three quarters of adults in the world are lactose intolerant, lacking the enzyme (lactase) needed to act on sugar that is found in milk (lactose); It is rather the non-intolerance that is an oddity, but even people who tolerate milk often suffers from some problems in its use: bloating, digestion problems, etc.

Beside intolerance, the health effects of the consumption of milk and dairy products are similar to those resulting from the consumption of other animal products such as meat, because the nutrient profile is similar, such as the content of animal protein, saturated fat and cholesterol. As with meat, milk is completely lacking in fiber and the hundreds of phytochemicals contained in plant foods, which have been shown to be protective against degenerative diseases such as coronary heart disease and cancer.

Even the widespread belief of the usefulness of milk and cheese as food for "make your bones strong" should be reexamined, even though milk contains a lot of calcium, it also has all of the above disadvantages. As stated by Prof. Walter Willett, "Drinking three glasses of milk a day is like eating twelve slices of bacon or a Big Mac and a portion of fries" [Walter C. Willett, in “Eat, Drink and Be Healthy”, The Harvard Medical School Guide to Healthy Eating , Simon & Schuster, 2001]

As stated by the World Health Organization (in collaboration with FAO) in its 2002 report on the evidence on the osteoporosis problem, there doesn't seem to be any correlation between increased calcium intake and a decreased risk of bone fracture, as subsequent studies have confirmed. So much so that the WHO/FAO recommendations for osteoporosis indicate eating more fruits and vegetables, rather than relying on dairy products for bone health. [WHO/FAO, Diet, nutrition, and the prevention of chronic disease. Report of the Joint WHO/FAO expert consultation, 26 April 2002].

In summary, here are some problems associated with milk consumption:

Iron deficiency: milk has an iron content almost nil (0.2 mg/100 mg), inhibits the absorption of iron from other foods and is responsible for the loss of blood from the intestinal tract, contributing to the reduction of the body's iron stores.

Calcium: as explained in the section dedicated to calcium, this mineral should be obtained from plants, in order to avoid the simultaneous intake of saturated fats and to ensure the consumption of bone-healthy substances found only in plants.

Contaminants: it is known that intensive farming makes heavy use of antibiotics and other drugs, which are then also found in milk, as well as meat. Also the cultivation of plants for animal feed are sprayed with chemicals of every kind, which accumulate in animal products. Finally, sterilization treatments allow germ survival in milk, and the European Directive 92/46/EC establishes a limit not exceeding 100,000 germs per mL. The same Directive also allows a content not exceeding 400,000 per mL of "somatic cells", whose common name is "pus".

Lactose: as has already been explained, three quarters of the human population does not digest lactose, resulting in abdominal colic, gas and diarrhea. If digested, metabolized lactose produces galactose, a monosaccharide that has been associated with ovarian cancer and cataracts.

Allergies: milk is one of the main causes of allergies (food and others), so much so that, by eliminating dairy products, many people are freed from allergies that bothered them for years. During the digestion of dairy products, more than 100 antigens are produced (substances that trigger allergies). Often symptoms are not directly attributed to the consumption of milk, but many people with asthma, allergic rhinitis, rheumatoid arthritis, get better by stopping dairy product consumption.

Infant colic: involves one nursing infant out of 5, and are often due to the intake of dairy products by the mother.

If you want to understand how much dairy products contribute to your skin or allergy problems, asthma, gas, diarrhea or constipation, or if you simply want to experience how your body reacts to the elimination of milk, try a test period of at least 3 weeks. In fact, this is the time necessary to eliminate or to create a habit. In this brief period of time, many people find great benefits such as a reduction in cholesterol levels in the blood, a loss of a few pounds, and especially, relief from migraines, allergies, asthma, indigestion or stomach problems.

Many dishes can easily be made without milk, by simply deleting this ingredient, or replacing it with soy milk or other vegetable milks.